Not Just Another Preacher

In
the early years of the previous century, Tagore and Kipling both had mentioned
Pakhtun characters in their writings, and both had presented them as the fierce
and ferocious men in their emotions and acts.[1] Numerous references with negative
connotation to the violent and volatile nature of our nation can be found in
various other compositions, as well. For instance, as Pyarelal in Thrown to the
Wolves – his far famed work on the non-violent struggle of Baacha Khan — has
quoted the following from Fielding King-Hall’s Thirty Days of India,

“One Pathan was sitting on the ground listening intently to a radio
broadcasting programme while his neighbor continued to chatter. The first man
told the talker to shut up, but the later observed that he had as much right to
speak as ‘that loud mouth over there’. The radio fan promptly switched off the
human ‘loud speaker’ by sticking a knife into his ribs” [2]

However, the most interesting accounts of Pakhtuns and Afghans’ natural traits
can be found in the declassified secret reports and official correspondences
preserved in the India Office Library in UK. We have seen a few glimpses of the
same in Baacha Khan aur Khudaayi Khidmatgaari of Khan Abdul Wali Khan. One line
that he has quoted is particularly interesting and holds relevance even today:
it has been taken from a letter dated 10.11.30 by Lord Irvin to the then
Secretary of State for India, 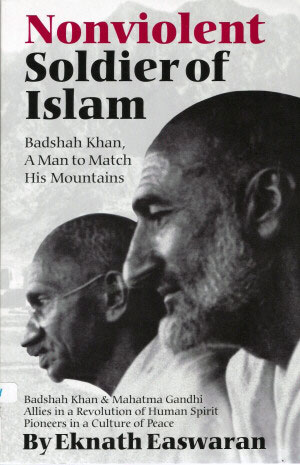 Ten
years had passed to the adoption of non violence by Baacha Khan, and twenty to
the launching of his movement for the social reform of his people, when this
letter was written. Twenty one years from now will complete the century of this
correspondence, and this corner of the earth continues to be as troublesome to
the outer world, and it still occupies a huge share of world’s attention. The
difference, however, is that in those early years the irritating matter for the
western colonial rulers of our region was the non violence that our great leader
Khan Abdul Ghaffar Khan not only advocated and taught to his followers but
personally practiced in the most aggressive manner; while today we are living in
conditions where violence has been imposed on us.

The non violent philosophies of passive resistance, pasificism, ahinsa, and most
recently the theories of nonkilling by Glenn D Paige – all have more
protagonists and preachers and fewer practitioners. The Pakhtun nation is very
fortunate that the most enthusiastic practitioner and teacher of non violence
was born among them. He came from a very affluent family, but his heart ached
for the commoners. He chose to become one of them. He never confined himself to
the stage or podium where he could pay only lip service to the cause he wanted
his people to stand for. He always reached out to all of his people.

In this context one incident narrated by Khan Abdul Wali Khan in his book Baacha
Khan aur Khudaayi Khidmatgaari is particularly moving. At the start of his
political career, Wali Khan was made to visit Karak area along with a thousand
companions. The weather was hot and they had to go there on foot. The areas
chosen for their visit were arenaceous, and it was the month of Ramadan, which
means they had to be on the move in hot sands while fasting from early morning
till late in the evening. Wali Khan says that he got blisters on his feet on the
second day of the journey, and he would walk bare footed on the hot sands as he
was unable to wear his shoes because of his blisters. The area was sparsely
inhabited, and the villages were situated at long distances. One day, after a
long and tiring journey, they reached a tiny village and stopped at a mosque
where a charpai was lying close to a tree. Wali Khan writes that exhausted from
the journey, he immediately lied down on the charpai. His companion in the
journey was a close associate of Baacha Khan. He heard the groans of Wali Khan
and told him that he distinctly remembers that once Baacha Khan had also visited
the same village in the same weather and under the same conditions, and he had
also stopped at the same mosque. Just when he sat down on the charpai, he saw
rising smoke on the nearby hill. He asked the imam-e-masjid if there was another
village up there. The imam replied in negative and told that there was only one
house on the hill where a single man lived. Upon hearing this, Baacha Khan
immediately got up and said to his companion that he wanted to go to the man on
the hill. The imam tried to assure Baacha Khan that his message would be
conveyed to the man when he would come down to attend the Jumma prayers.
However, Baacha Khan still went up the hill to meet him saying that he did not
want that man to feel neglected.[4] Such was his zeal for
the propagation of his philosophy through personal interactions with his people.

In rallies and in protest marches where the authorities would order to bludgeon
and baton charge the protestors, he was always there to take the hits. Whenever
there was a spate of arrests, he would be among first of the arrested. His
arrests and incarceration were most humiliating and most painful ever borne by
any leader of his stature. During the Quit India Movement, he was beaten hard
before he was arrested and taken to Hari Pur Jail from a protest rally. He had
received severe injuries; his ribs had been broken . The man, who preached and
practiced non violence, was himself subjected to worst forms of violence.

When he was first arrested, he was taken to the jail handcuffed and throughout
the period of his confinement, he had fetters. There were no fetters to fit his
legs. The pair they had chosen for him had wounded him badly. While they were
putting it on him, the portion of his leg above the ankle had bled profusely. He
was told that he would get accustomed to it soon.[6] The
cell where he was kept stunk. The earthen sanitary pan there was full to the
brim with feces. When he was taken there he immediately stepped out and told the
officer that the stink was unbearable. The officer pushed him inside and locked
the door. Not for a second was he allowed to go out of that cell. Food was
pushed through the bars and the cells were guarded to prevent the visitors from
communicating with him.[7] It was his personal examples
that motivated his fellow Pakhtuns to make supreme sacrifices for the sake of
their land. The events of 23rd April, 1930 are a proof of the selflessness of
the Khudayi Khidmatgars. The following extracts from Young India sum up what the
Pakhtuns had been subjected to that fateful day:

“A troop of English soldiers reached the spot and without any warning to the
crowd began firing into the crowd in which a number of women and children were
present. When those in front fell down, those behind came forward with their
breast bared and exposed themselves to the fire. Some people got as many as 21
bullet wounds. [Still] all the people stood their ground without getting into
panic…An old woman seeing her relatives and friends being wounded came forward
[but] was shot and [she] fell wounded An old man with a four years old child on
his shoulder unable to brook this brutal slaughter advanced asking the soldier
to fire at him. He was taken at his word and he too fell down wounded. The crowd
kept standing at the spot facing the soldiers and was fired at from time to time
until there was heaps of wounded and dying lying about. The Anglo-Indian paper
of Lahore, which represents the official view itself wrote to the effect that
the people came forward one after another to face the firing and when they fell
wounded they were dragged back and others came forward to be shot at. This state
of things continued from 11 to 5’o clock in the evening. When the number of
corpses became too many the Ambulance cars of the Government took them away.”
[8]

Eighteen years later and a year after Independence, the same scene was reenacted
in Babara where the loyal members of the same organization, protesting the
incarceration of the same leader received the same treatment.[9]
The women holding Quran close to their chests and above their heads were an
addition. However, the shoot orders this time were not given by colonial rulers.
The new rulers were following in the footsteps of their colonial masters. They
tried their best to conceal the truth and consequently the tragedy of Babara has
been lost in history.

Baacha Khan and his followers never hesitated from offering any sacrifice for
the sake of liberty and independence. The tragedy, however, is that in response
to their selfless efforts and sacrifices they were always placed under more and
severer torture. The treatment meted out to them by the new state was evidence
that post partition life for the Khudayi Khidmatgars was going to be very tough.
The reasons were obvious. Khudayi Khidmatgars were allies of Congress before
partition, and therefore, in the new state they were not going to be accepted as
loyal citizens despite all their sincere assurances. In a letter written to the
author of Thrown to the Wolves many years after the independence, Baacha Khan
said:

“Considerations of personal harm have never weighted with me. What saddens me is
that while we shrank from no sacrifice for the sake of India’s independence, the
Congress on attaining it forsook us. They gave themselves upto enjoyment while
we were left to suffer alone. We are still dubbed ‘Hindus’. This was unbecoming
of the Congress” [10]

The plight of his people had compelled him to express his bitterness. This was
the utterance of a man whose fear was that the sacrifices of the people who had
answered his call and laid down their lives for the cause of Indian independence
would go unsung.

One striking characteristic of Baacha Khan was that despite being an affluent
and practicing Muslim he never had any elitist and boastful manners that were so
visible in some other contemporary Muslim leaders. He never considered religion
as dogma that should be used and misused for political purposes. He studied
religion and took his lessons from the early days of Islam when Muslims were
subjected to worst persecution but they did not resort to armed retaliation.
Baacha Khan knew well and also told his people that:

While the majority of the non congressional Muslim leaders were implicitly or
explicitly emphasizing communal differences culminating into violence, Baacha
Khan was vigorously trying to enable his people to get hold of their long
forgotten divine weapon – patience. His message to his people was:

“I am going to give you such a weapon that the police and the army will not be
able to stand against it. It is the weapon of the Prophet (Peace be upon him),
but you are not aware of it. That weapon is patience and righteousness. No power
on earth can stand against it. When you go back to your villages, tell your
brethren that there is an army of God and its weapon is patience. Endure all
hardships. If you exercise patience, victory will be yours.”

This is one message that needs to be spread in every nook and corner of the
world. The duteous ones will surely take it.